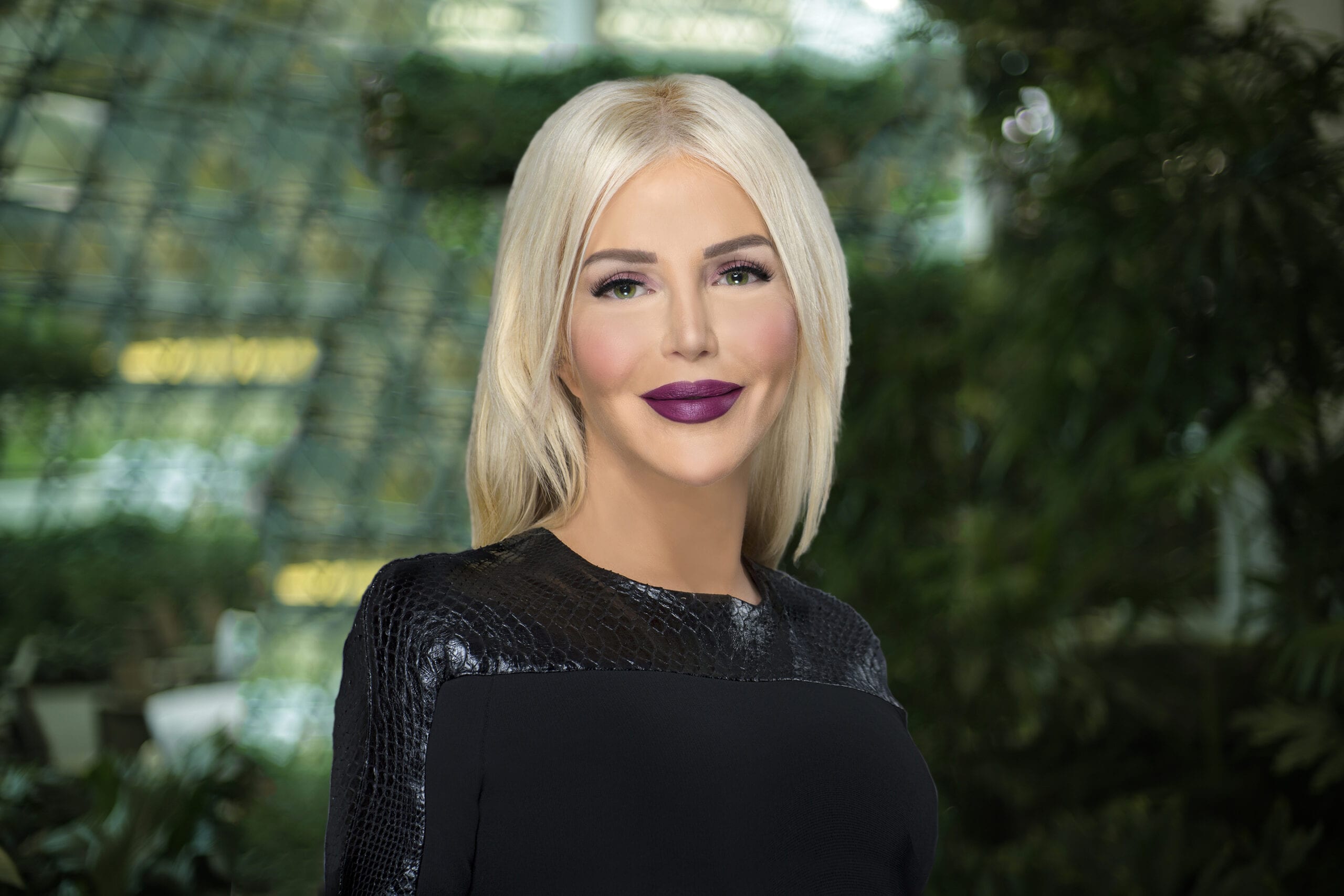 Joumana Kayrouz is the founder and owner of the Michigan Center for Personal Injury and the Law Offices of Joumana Kayrouz PLLC. Founded in 2003, Kayrouz’ firm has been recognized as one of the largest personal injury law firms and the largest woman-owned law firm in Michigan.

Dubbed “Queen Of The Legal Ads”, Kayrouz’ face has appeared on the covers of over 750 buses, 250 billboards, as well as television. Kayrouz has signed in 2014 what remains the single largest outdoor marketing campaign in Michigan advertising history. Kayrouz has also been called “The Helen Of Troy” of legal marketing because her face has launched thousands of lawsuits.

Joumana Kayrouz is the founder and owner of the Michigan Center for Personal Injury and the Law Offices of Joumana Kayrouz PLLC. Founded in 2003, Kayrouz’ firm has been recognized as one of the largest personal injury law firms and the largest woman-owned law firm in Michigan.

Dubbed “Queen Of The Legal Ads”, Kayrouz’ face has appeared on the covers of over 750 buses, 250 billboards, as well as television. Kayrouz has signed in 2014 what remains the single largest outdoor marketing campaign in Michigan advertising history. Kayrouz has also been called “The Helen Of Troy” of legal marketing because her face has launched thousands of lawsuits.

Since earning her Doctorate in Juris Doctor degree in 1997, Kayrouz has recovered hundreds of millions of dollars for her injured clients in auto accidents. She built her career on a combination of legal savvy, hard work, and a sincere empathy for the financial, physical and psychological needs of accident victims. Her law firm is growing constantly, adding highly qualified attorneys and legal staff in other fields such as immigration law and bankruptcy law.

Kayrouz was born in Beirut, Lebanon. She began her Undergraduate Studies at the American University of Beirut (AUB) in Beirut, Lebanon, then emigrated to the United States in 1986 at the age of 22 with only $1000. Kayrouz initially settled in Connecticut, where she completed her undergraduate studies at Southern Connecticut State University ( SCSU), then attended the prestigious Yale University, where she obtained a Master’s degree in Ethics, with a concentration in Medical Ethics in 1992. Kayrouz later moved to Michigan to study law at Wayne State University School of Law, and graduated in 1997 with a Juris Doctorate in law.

Kayrouz, who is fluent in four languages, several dialects of Arabic, French, Italian, and English.

In addition to managing her successful law practice, Kayrouz also maintains a most energetic role in the community and social activism. Throughout the years, she has helped and lent her support to multiple organizations, charities, and causes in the United States and abroad.

Kayrouz served as the national president of Auxilia, a premier Lebanese charitable organization, raising millions of dollars in aid to families from her native country.

Kayrouz served on the Arab American Political Action Committee (AAPAC) and was an honorary adviser to the Arab-American Anti-Discrimination Committee (ADC). Having gained the esteem of her peers, she became an Executive Board Member of the Michigan Association for Justice (MAJ) and the Minority Delegate from the State of Michigan to the American Association for Justice (AAJ).

In March of 2012, Kayrouz was appointed President of the Board of Directors for the Miss Lebanon Emigrants USA by the Lebanese government’s Ministry of Tourism. As President of the organization in the United States, Kayrouz was the official representative of the Lebanese Ministry of Tourism in the United States and in everything related to Lebanese events in the U.S.

Kayrouz helped direct the Miss Lebanon Emigrants – USA 2012 pageant which was held in Michigan. The event attracted celebrities from around the world.  The jury was headed by Lebanese former Miss Universe winner Georgina Risk and attended by the then Lebanese Minister of Tourism and other high ranking officials.

For over 20 years, Kayrouz hosted her own Arabic language program on AM radio, where she offered much needed legal advice to her Middle-Eastern community, most of whom only spoke Arabic. In the past few years, Kayrouz has moved on to FM radio, where she currently hosts a daily one-hour live legal radio program on 102.3 FM. The show is widely popular and covers topics such as Immigration, Personal Injury, Workmen’s Compensation, Social Security, and bankruptcy. The shows can also be found on the Joumana Kayrouz YouTube channel.

In March of 2013, Kayrouz launched the Joumana Kayrouz & Daughters Foundation with an endowment that provided health and medical assistance to needy individuals in her native country Lebanon. The Foundation took on various projects. Among its notable projects was the overhaul and rebuilding of the Emergency Room of Tel Chiha hospital in Zahle, Lebanon, the oldest hospital in the Beqaa region of Lebanon, as well as the creation of an ENT clinic in collaboration with the Second Lady of Lebanon, Randa Berri, one of the 29 clinics founded by Mrs. Berri and serves the needs of 39,000 Lebanese handicapped children in the south region of Lebanon.

In 2013, recognizing the need to curb efforts by unscrupulous ambulance chasers in Michigan who pursue car accident victims for financial gain, Kayrouz personally wrote compellingly to the Michigan Legislature, urging them to pass anti-ambulance chasing laws and imposing stiff penalties against violators. Her requests were heard and in December of 2013, Kayrouz stood by Michigan’s then Governor Rick Snyder at the Capital, at the ceremonial signing of the two Public acts, 218 and 219, that protect accident victims from unscrupulous parties. The law became known as the “anti-ambulance chasing law.”

In 2014, Kayrouz also served as the Official Sponsor of the St. Jude Children’s Research hospital’s 50th anniversary with a significant donation.

In 2014, Kayrouz lent significant financial support to Garden City Hospital in Garden City, Michigan. The hospital opened the doors to a new birthing center after months of renovations to their oldest wing. Hospital president and CEO Gary Ley applauded the “substantial” support of Kayrouz and her donation for future families at Garden City.

In 2019, Kayrouz was sworn in before the United States Supreme Court, a very rare privilege very few attorneys experience in their legal career. She traveled to Washington DC and was sworn inside the historical United States Supreme Court by Chief Justice  Stephen Roberts. Kayrouz reflected on that moment as a very humbling one for a 22-year old young woman who came from Beirut, Lebanon with $1000, limited English, but big hopes.

In 2016, Joumana Kayrouz was voted “Best Dressed Woman Of The Year” by Hour Magazine.

In April of 2015, Kayrouz had the immense pleasure of meeting with Pope Francis at the Vatican in Rome, Italy.

In 2015, alongside 15 other women who have excelled in their fields and became an inspiration to other women, Kayrouz received the prestigious “Esteemed Women of Michigan” award.

In 2014, Kayrouz was featured on the cover of popular Detroit weekly newspaper Metro Times with 1.4 million copies printed, accompanied with a 10-page article written by award-winning writer and producer Drew Philp, who shadowed Kayrouz for weeks to get a glimpse of the woman “behind the billboard.” and rare insight into her life and background. The article entitled “Citizen Kayrouz” drew huge acclaim for the writer and great interest about Kayrouz. For the first time, readers got an intimate glimpse of the life and struggles of one of the most talked about legal celebrities in Michigan and in the Midwest.

In 2014, Kayrouz was named by the prestigious Crain’s Detroit Business as the “American Dreamer.”  This recognition cites highly successful men and women of Metro Detroit and their road to accomplishment in the face of adversity.

Ms. Kayrouz has been invited as a guest speaker and lecturer are far too many to mention, from serving as keynote speaker to being a frequent guest lecturer at Wayne State University Law School.

In 2013, Kayrouz received the “Humanitarian of the Year Award” from Life for Relief and Development at their 20th Gala.

In 2012, Kayrouz also received the “Trailblazer Award” in recognition of her trailblazing achievements in the legal field, a field traditionally heavily dominated by male attorneys.

Kayrouz’ contributions to the political arena are far too long to name. Kayrouz regularly holds fundraisers at her home for candidates running for political office such as for US Congress and US President. She has also hosted at her home Foreign Cabinet Members, members of US Congress, and Hollywood celebrities. She has appeared twice on Bravo‘s Detroiters sitcom playing none other than herself. Kayrouz has and continues to serve on sitting judges’ campaign committees as well as new candidates in their election bids.

Kayrouz is a devoted mother to her two daughters, Stephanie and Nathalie, and a proud grandmother to her beloved granddaughter, Stari. She is somewhat of a fanatic about her French bulldogs, Pierre and Genevieve. In 2020, Kayrouz and her family opened an authentic French patisserie in their dogs’ names in Bloomfield Hills, Michigan. The Patisserie is called, quite fittingly, ‘Chez Pierre & Genevieve’. The family is also working on the final touches of a French bistro, also fittingly titled ‘Bistro Pierrot’. Kayrouz loves to travel, but, except for occasionally longer trips, a typical vacation usually runs from Friday through Sunday.